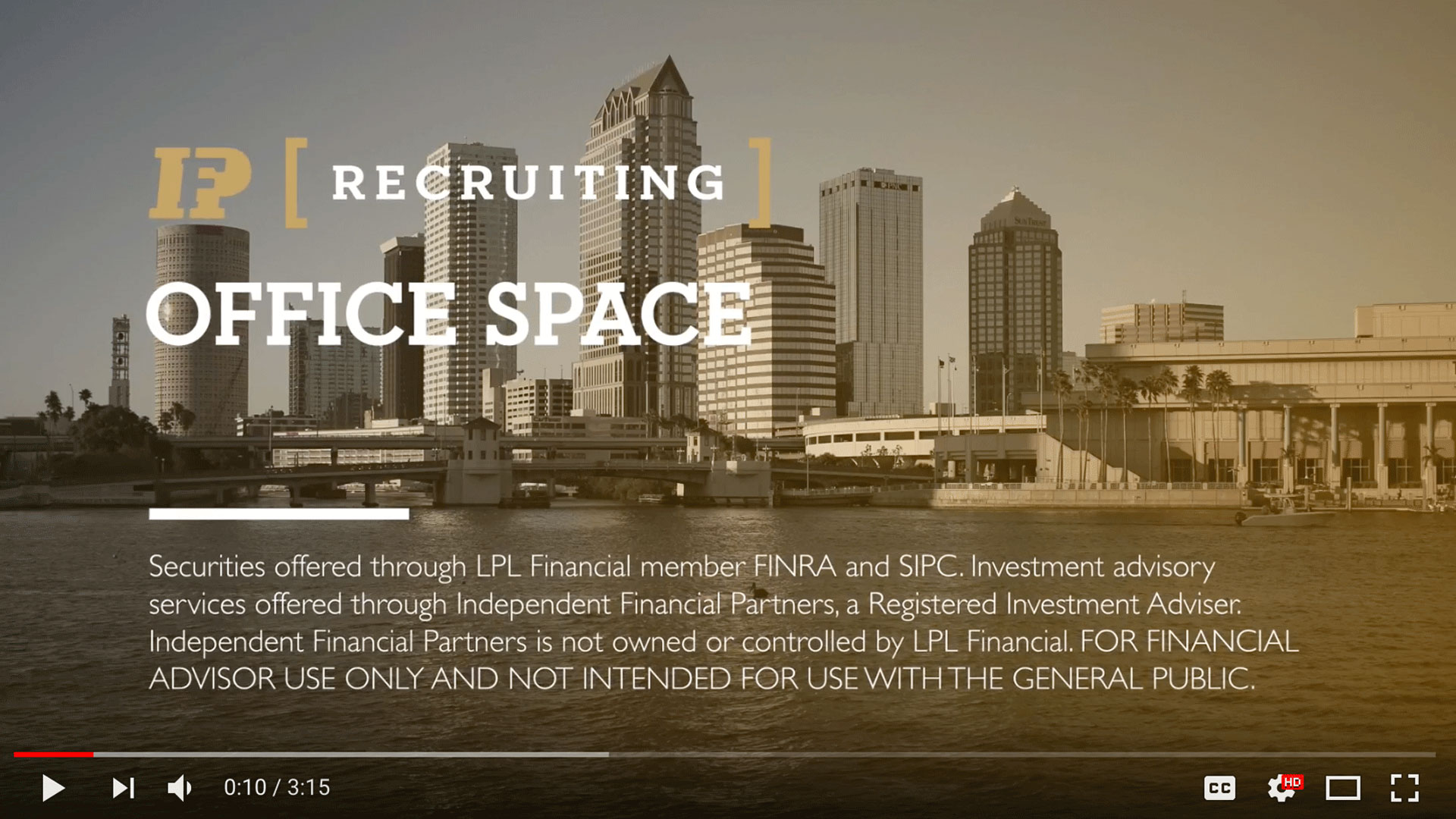 This is Ned Van Riper with Independent Financial Partners and I am speaking to you from our corporate office in Tampa. I wanted to shoot a quick message about office space because office space is often times a very overwhelming and daunting part of the conversation. It’s typically the most fun part of the conversation, but for breakaway advisors that are considering establishing their own practice for the first time, it can be pretty overwhelming – they’re not really sure where to start.

As an independent advisor, there’s a lot of flexibility and options around office space and I just wanted to tell you about a few of them.

We have many advisors across the country that rent office space. Many advisors actually purchase their own building and build out office space for the first time. That’s certainly dependent upon what part of the country you live in. An executive suite, something like a Regis, is a great, low-cost solution. I tell advisors it’s a really nice short-term solution. Some advisors are there full-time. But an executive suite can give you not only an office, but an administrative assistant to help with the phones in addition to a very nice conference room to meet clients in.

Other advisors actually work from a home office and I know for wirehouse advisors that can seem like a crazy choice, but we have many successful advisors that work from home and quite frankly wouldn’t have it any other way. It’s the lowest cost, it’s very convenient, and some advisors even meet clients in their home office if they can accommodate them. So, it’s certainly not for everybody, but not something to be overlooked as well.

Also, you know, as an independent advisor, keep in mind that you’re a business owner, so often times the cost for office space is one of the largest costs you’re going to have. So, be smart about office space. For a solo advisor, you don’t need to have more than 800 square feet or so. For a small team with staff and other advisors, 1,500 to 2,000 square feet can be an ample amount of room for your team, but you have to make smart decisions because this is your largest cost.

From a technology perspective, you know, the good thing is that in these days you need more than really good Wi-Fi, a land line, a laptop, and a cell phone. You can run your practice from no matter where you are from one of these devices and it’s low cost and it’s simple. So, you don’t need to have a server room in your office. You just need to have really good Wi-Fi and, again, a phone and a laptop. 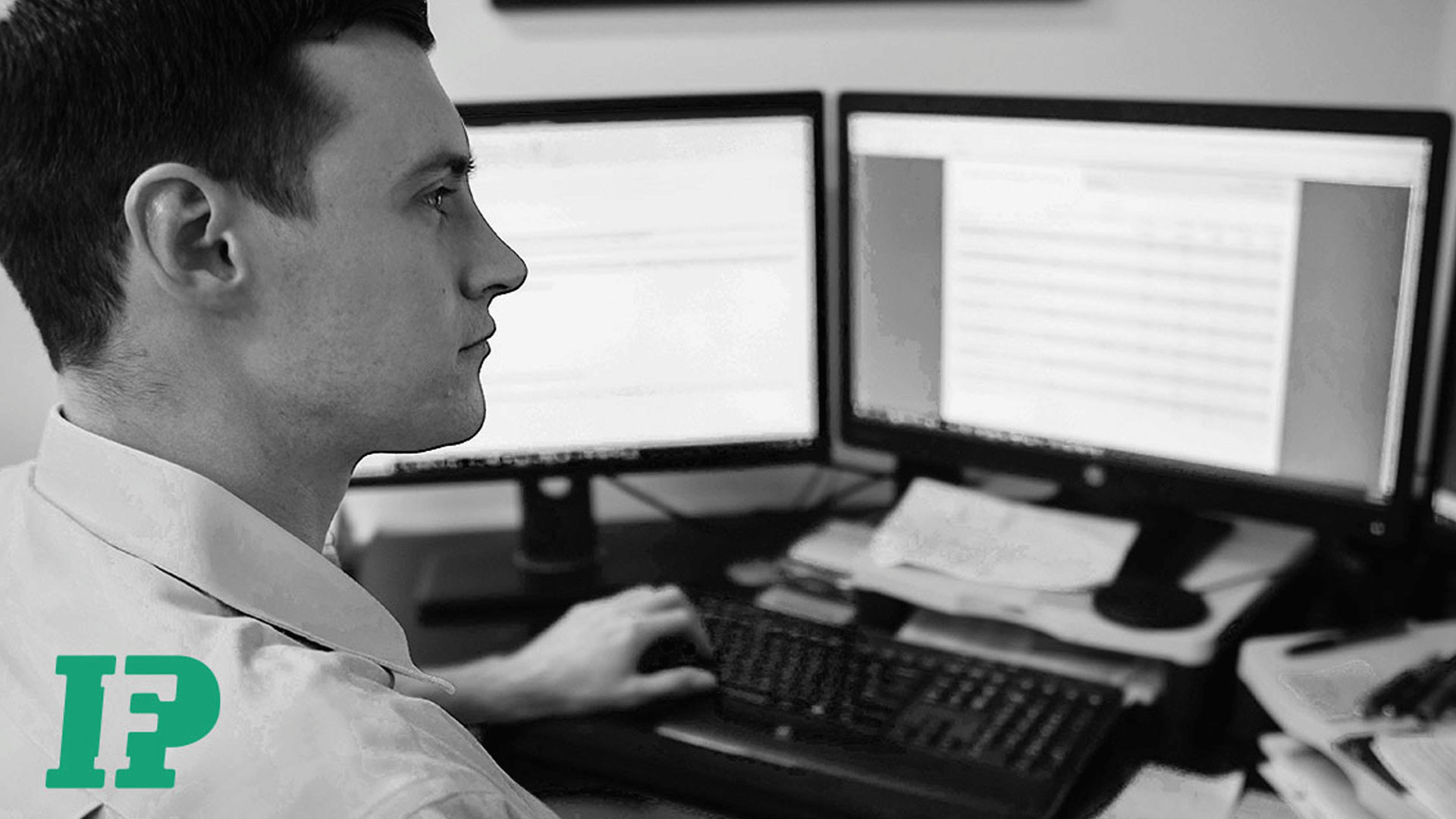 The Dilemma of Performance Evaluations

Everyone likes a way to track their performance. Whether it be through reviews at work, stepping on the scale at the gym, or performance of an investment account, humans like feedback. Feedback acts as a guidepost, allowing us to analyze whether we are on the right track to meet our goals. While it is necessary to have some way to measure performance, there are many different factors that need to be considered when evaluating your progress.

While absolute performance metrics, like number of pounds lost or annual percentage return on your investment account, are valuable, the time horizon over which you are measuring, the amount of risk you are taking to get the performance, and the process you have in place are all critical aspects that can frame the way you interpret the results.

To demonstrate the first key consideration, time horizon, I will present two graphs:

Take a moment and evaluate the performance of the investments seen in both graphs. If you’re like most people, you would never want the investment in the first graph but would jump on the chance to get in to the second. I will let you in on a little secret: both charts are the S&P 500 total return index, just evaluated over different periods. The first from the market peak on 10/8/2007 to lowest point in 2009 (3/9/2009), and the second also from 10/8/2007, but going through the end of 2017 (eight-year longer time horizon).

While it always hurts when our investments are going down in the short term, it is important to keep in mind that investing is a marathon, not a sprint. Putting too much emphasis on short-term performance, or performance over arbitrary time periods, can lead to sub-optimal decision making, such as selling at the market bottom for a 55% loss instead of holding a few years longer and more than doubling your money.

Another important factor to consider is the amount of risk you are taking to reach your goals. While this is often talked about with regards to investing, the same idea can be applied to most other goals, like weight loss, for example. If your goal is to lose 50 pounds, you can take the safe route and work out every day and eat the right food, or you can take the riskier route and take weight loss drugs or practice unhealthy eating habits. While the result might be the same under both methods, the risker path has the potential to lead to negative side-effects that may actually hurt your chances of success.

For example, had you taken weight loss supplements that you were allergic to and had to be hospitalized, you might not be able to work out for an extended period. This could potentially lead to you gaining weight and failing at your goal of losing 50 pounds. Putting this idea into an investment context, two investment strategies could have the same annualized return, but one might have taken a much greater amount of risk to achieve those results. It is important to evaluate the amount of risk being taken to put context around the performance to determine if you are being rewarded for taking the additional risk.

Understanding probabilities and luck is also important when gauging performance. If a person who has never played the lottery wins on their first ticket, they might mistakenly think that lottery tickets are the best “investment” in the world. And that may be true for this one individual, however that line of thinking doesn’t take probability into account. With the probability of winning the lottery being negligible, when you adjust the potential return (i.e. lottery payout) for the probability of winning the jackpot, the expected return is negative, despite some lucky people winning millions. From an investing context, this is like making moonshot investments on penny stocks or speculative growth companies. While some might produce big returns, most will fail. If you look at too small of a sample size or if you don’t take probability into consideration, you may be mistaking luck for skill.

Often times the difference between luck and skill in investing is a clearly defined investment process. Make sure that you or your financial advisor has a well-defined investment strategy based on empirical evidence that you understand and believe in. Ask questions to make sure you understand the strategy and hold your advisor accountable for sticking to the process. Short-term underperformance is tolerable, but only if the process is followed. Likewise, while strong performance is desirable, it should be viewed as lucky and fleeting if a process is not in place.

With so many factors at play, how should investors go about evaluating their account performance to ensure they are on the right track? The biggest key is to clearly define your goals, specifically outlining the time until the goal and the amount you will need at that time. From there, it is wise to work with an advisor to create a financial plan tailored to your unique situation. This plan should be used to come up with an appropriate asset allocation strategy. The plan should be dynamic and should be reviewed and updated at least annually, but preferably in real-time. Rather than comparing your investment portfolio to an arbitrary benchmark, your financial plan can become your performance guidepost to see the progress you are making towards reaching your goals. As long as you are on pace to meet your goals, you should not concern yourself with your account’s performance relative to a market index, your neighbor’s performance, or any other arbitrary benchmark.

Investors need to understand their emotional investing biases and their impact on evaluating performance. To combat these biases, you should focus on time horizons similar to that of your goals and evaluate performance over rolling time periods, as opposed to arbitrary point to point measures like calendar years. You should also not get too caught up by short-term performance. Additionally, make sure you have a well-defined investment process that is appropriate for your risk tolerance and ensure it is strictly followed. Finally, you should avoid comparing your performance to indexes and/or other people and instead focus on the progress toward your goals.